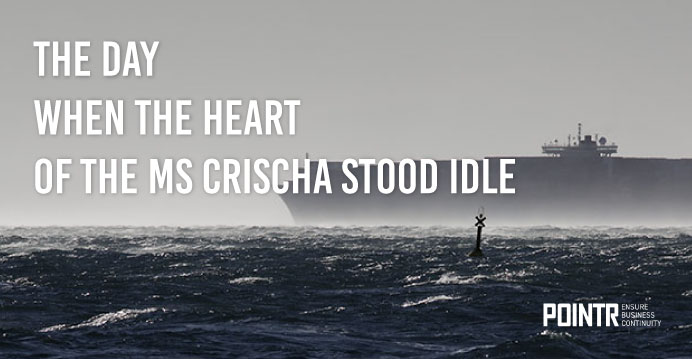 If it had not been for the roaring of the heavy sea, it would have possible to hear a soft, but alarming, purring sound emanating from the bridge of the MS CRISCHA, as vital systems began to fail and shut down.

At 00.43 on September 29, during the watch of the First Mate and after a “firework display” of red warning signals, all crucial sensors and displays stopped working. The ship’s digital heart had just stopped beating.

Immediately, all efforts were made to revive the system and regain control of the ship. Although relatively near to the coast, the MS CRISCHA was travelling from Yantian to Bremerhaven on the Ae10 route, which at the beginning of the holiday period is nearly as busy at the A7.

The MS CRISCHA, its crew and cargo – stacked containers containing international freight bound for Europe – now drifted powerlessly across the North Sea in the dark night.

At 1:15 a.m., a message arrived at the Fleet Operation Center:

A modern automation and navigation system is a fully integrated system that consists of hardware and software that covers almost all aspects of a ship’s operation.

From the propulsion system to the energy management of the auxiliary engines, including the operation of the auxiliary machines, the loading and unloading of cargo, the navigation, as well as managing maintenance and purchases of replacement equipment. A fully functioning system, guided by thousands of sensors, unquestionably makes travelling at sea far safer.

But what if, for some reason, this system stopped working? The ship would be incapacitated and not even the most experienced marine engineer, daubed with oil and a wrench in hand, could fix the problem.  It is simply too complicated, too comprehensive and in most cases, the system has been further upgraded, modified, optimized and adapted by the respective shipowner.

According to the usual procedure, the superintendent immediately brought on board by helicopter, the correct specialists to analyze the problem. At the same time, specialists from the particular suppliers worked ashore to identify the fault.

One can only imagine the mounting pressure on the Operator as they remained in contact with the ship’s marine engineer. As the clock ticked and time was being wasted, so the corresponding costs steadily increased.

The crackling radio, language barriers within the crew and the time pressure only added to the tension. The feedback loops seemingly went on forever.

The operator at the service center of the system supplier barely understood what the man on board the MS CRISCHA was trying to tell him. He closed his eyes, released a deep sigh, and wished he was on board himself. Or rather he wished to stay put in the Fleet Operation Center but be able to see exactly what the engineer saw on board. He thought of all the technical solutions that should be standard nowadays. When, after what seemed like an eternity, he received a third email from the ship, he tried not to lose hope. Unfortunately, the email contained a blurred and unhelpful picture of a wiring harness, as well as an incorrect log file.

Today, there are no longer any reasons why the operator’s wish to remain at the Operation Centre, whilst being able to see clearly the real-time situation onboard, should not be realized. It is no longer a question of technical possibilities, rather it is a strategic decision, based on an assessment of costs and risks. It is a decision that determines whether a problem on board is resolved in 30 minutes or 6 hours.

At its heart is an investment decision about whether or not – considering all the risks involved – an operator wants to maximize the real time expertise available to the crew on board, which will help them to repair systems as quickly as possible.

Modern digital solutions, such as the Finnish remote guidance software POINTR from Delta Cygni Labs, provides maritime specialists with all the vital features necessary to enable them to remotely solve complicated technical challenges.

POINTR is an industrial remote guidance solution based on augmented reality which makes it possible for the remote specialist to provide detailed instruction to the technician on site and share crucial information with them. Conventional smart devices (i.e. smartphones, tablets) are sufficient in terms of facilitating this communication.

In addition, appropriate hardware, such as smart glasses or helmet cameras, ensure that the technician on site can use their hands without restriction.

With the help of such a remote guidance solution in the form of an easily installed app such as POINTR, the technical expert can monitor the events on board in real time via audio and video transmission. Furthermore, augmented reality features provide the ability to display additional content, such as symbols, on live and paused video stream to support and enhance communication.

It took another 5 hours and 7 minutes until the heart of the MS CRISCHA began beating soundly again. Once on board the technician’s assumption proved to be correct. Within 25 minutes, he had identified a faulty oil level sensor and replaced it with a flick of the wrist. The faulty sensor turned out to be a cheap, unbranded replacement part. However, everyone was fully aware that the MS CRISCHA had been extremely fortunate and had gotten off lightly this time. They were left in no doubt that this adventure, with the risks and costs involved, could all have been avoided with a remote guidance solution such as POINTR.